Don’t feel like braving the hordes on the Lower East Side (ever. again.)? No good music in the hood? Bored to death with “Bored to Death”? I have three words for you, my friend: Minor League Hockey. Did you know that Brooklyn has its own hockey team? Did you know that Minor League Hockey is totally awesome? Did you know that there’s still a place in America where you can get a beer for $3? All of this: amazing and true. Pretty much every Friday night the Brooklyn Aviators take the ice out at Floyd Bennett Field- the oldest airfield in New York City, once a home base for flyboys like Douglas “Wrong Way” Corrigan and aviatrices like Miss Amelia Earhart– the rink is in a converted hangar. The hangar complex has been re-modeled into a fantastical bizarrely/wonderfully suburban feeling sports complex with a climbing wall, middle-school-date-ripe skating rink, basketball courts, gymnastics gear, and a funny, all-nations-food-court where the guy who runs the pizza ovens sort of looks like Robert Deniro in Taxi Driver. The place is great- a departure, an adventure- but the hockey… that’s something else entirely. 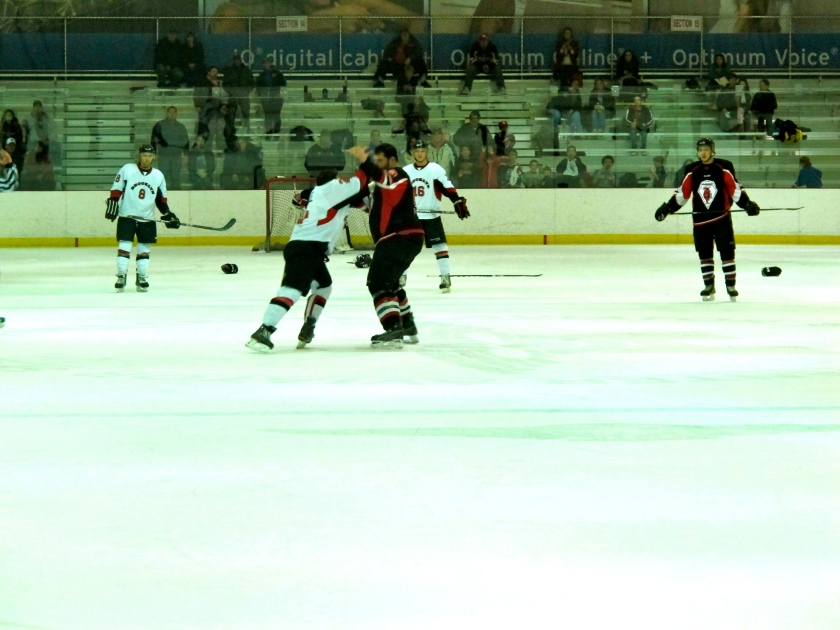 Fast and furious and beautiful and funny and brutally action packed, it’s everything you thought you knew about hockey (the missing teeth, the fights, the French Canadians) writ large and about 8 feet away from you. I think I saw someone’s nose get broken. And it was awesome. Also, I now understand the origin of the phrase “the gloves come off” (see above- ice littered with gloves, nose of dude on right- yeah, the big dude- about to get broken). Also, if the game stops because of a fight, they play the “Rocky” theme song over the loudspeaker. Also, because it’s minor league, at intermission they do hilarious things like “hockey bowling”- slinging a small child across the ice in an inner-tube to knock down huge inflatable pins and stadium employees. Also, zamboni. And if all that weren’t enough, let me reiterate: Beers are $3.

To get to Floyd Bennett Field you can:

a) If you have a car: drive all the way down Flatbush avenue, and turn left just before the Marine Park Bridge. Or, take the Belt Parkway (under the Verrazano Bridge, swinging by Randazzo’s on the way) to exit 11S.
b) Take the 2 or 5 train to the Flatbush Avenue/Brooklyn College  station (last stop), Take the Q35 bus one block from the train station – Flatbush  Ave. between Nostrand Avenue and Avenue. Request the bus to stop across from Aviator Sports and  Recreation at Floyd Bennett Field.
c) Stop one of the dollar buses cruising down Fulton yelling “Utica! Utica!” out of the window. It will cost you $1.
d) charter a helicopter flight and land at Floyd Bennett’s helipad.