Alright, dear readers, lest ye forget where we left off, the plan was to re-decorate the bedroom in our sweet little brownstone to create a space that belongs to Sweetheart and I equally, a space that is uncluttered, calming, functional, unified, and interesting. A good place to sleep, but also a lovely place to be. A place that is as bright as possible during the daytime while also being private at night… on the extreme cheap. Whew. Looking around the room (and spending a fair portion of wine-soaked cocktail hours during our recent vacation discussing nothing but this particular undertaking with Mama) I could break down the necessary changes into this list:

1) A window treatment solution that a) lets in as much light as possible while still maintaining privacy at night and b) addresses the many sins of the odd shaped and uneven windows that make that whole wall look choppy and disjointed.
2) A headboard for the bed that sets it apart as a separate entity in the room, encroaching windows be damned.
3) Cover up the shoe-shrine.
4) Edit everything else down to things of heart, beauty, and import.

Soooo… here are the results!

Mama made the curtains to cover the shoe shrine out of a flat sheet from Wal Mart (and also surprised us with a bunch crazy soft and lovely new bedding for Christmas/Hannukah), including the awesome pillow shams that she made and the little bolster that really ties the room together. Mama=Awesome.

For the window treatments, I used the divine Jenny’s amazing pelmet box tutorial, which may be the most inspiring DIY thing I’ve ever seen (it inspired tons of other people too… check out Jenny’s post on reader submitted pelmets here).

The pelmet boxes are deep enough to hide the unsightly privacy shades I installed while still leaving most of the window open to the light. Just what I needed! I also figured that if I had my pelmet boxes go all the way up to the ceiling, and by stretching them across both windows, they’d cover up the gap between the one window and the ceiling, mask the fact that one window is several inches wider than the other, and would create a unified visual line encompassing the bed area (and, hope against hope, make the room look larger??) on an otherwise choppy and weird wall.

Jenny’s tutorial calls for the sort of foam board that you would make a science fair project out of, but I couldn’t find any of that in my neighborhood (what is WITH that, New York?), so when I went to get the plywood for the headboard cut I had the epiphany to look in the insulation section of the Home Depot. I found this pack of Poly Panel foam boards designed to fit in between 2×4’s, each one 14″ by 5′ feet.

Since I wanted the pelmet boxes to go flush to the ceiling to mask the window’s unevenness, 14″ was the exact right height. And since the pattern on the (crazy) fabric I chose, Iman’s Punjabi Peacock (which we got at Mood for way cheaper than on Calico Corners) repeated directionally (ie: the feathers face a certain way on the fabric, and that way is across the fabric, 60″ selvage to selvage, instead of longways) I’d need to make three short boxes instead of one long one anyway, so this weird foam insulation pack ($6 for a pack of 6) was the exact right thing.

For the headboard, I chose a really dark blue velvet, which pulled in the same blue that was in the center of the Punjabi Peacock fabric.

I rounded off the corners of a pre-cut piece of plywood (thanks again, Home Depot), using a bowl for an outline, a small hand saw and a few beers (not recommended if you can afford power tools), and then wrapped the thing in velvet, batting, a cut up foam mattress pad and staple gunned the whole shebang. It was surprisingly easy and utterly satisfying.

I love velvet, and really wanted to try Jenny’s post on tufting, but the amount of velvet that would require was, alas, not in the budget. I also didn’t want it to be too girly, for Sweetheart’s sake, so I ended up going with almost the very simplest silhouette possible.

Another late-breaking epiphany occurred shortly after finishing the headboard. Sweetheart and I were out at the amazing Fairway grocery store in Red Hook and the awesome dudes who stock the coffee department happened to be re-stocking the coffee barrels from huge burlap sacks full of coffee.

I asked them what they were planning on doing with the sacks when they were done, and they guy said “Giving them to you, if you want them!”. Things like this make me want to kiss New York on the mouth. So, after a giddy trip back home, I opened up the coffee sack with a seam ripper, ironed it, and tacked it up on the wall between the headboard and the pelmet boxes. Unlike a more expensive/labor intensive/semi-permanent wallpaper or paint solution that would cover the entire disjointed wall floor to ceiling, the burlap panel only covers about 5 square feet over that one section of the wall, but because the room is so chopped up (and the pelmet boxes and windows trick your eye to go there) just that small change makes the room look much, much warmer with no money and a few tacks. 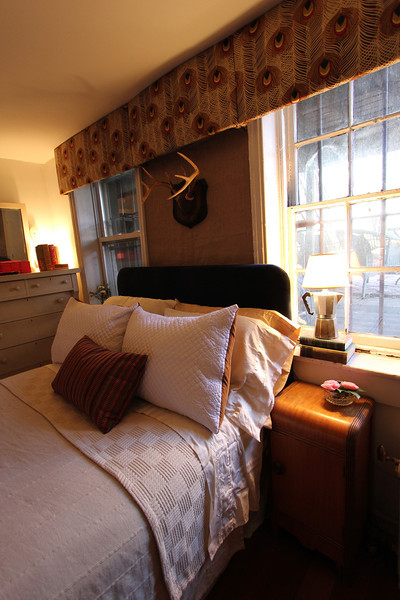 The antlers? We’re trying them out. So far I think we like them.

Authentic self//dwarves just out of frame✨
If anyone needed any more proof that this is, indeed, a most magical place, please swipe right to see a picture of my parents on a carousel together for the first time ever. Pure👍✨🐀🏰
@octanekittie striding into 2020 (feat. rosé bubbles)
Low Country Bluebird Polar Bear Club (photo c/o my heart @ravenelrichardson )
Let’s be honest, we’re both a little star-struck✨thank you @jgm7x for the intro and best first game experience for this little wahoo⚔️
Somehow this printed stack of 20 lyrics sheets to “Desperado” made its way into our woodstove kindling pile🤷‍♀️
All pictures on this blog were taken by Susannah Hornsby unless otherwise noted. If you you'd like to share something, please do! But, if you share, be sure to provide a link back to this nest. Thank you!